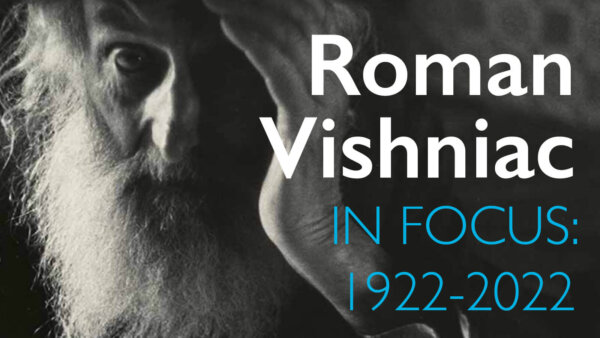 The Magnes Collection, in collaboration with UC Berkeley’s Center for Jewish Studies, presents “Roman Vishniac. In Focus: 1922-2022.” celebrating the reopening of The Magnes and the richness of the Roman Vishniac Archive.

This 2-day event combines an Open House (May 1) featuring “A Glimpse of Vishniac,” a digital display of photographs of Jewish life from Eastern and Central Europe from before World War II, as well as a day-long virtual Symposium (May 2) with internationally acclaimed scholars discussing the historical context and content of Vishniac’s photographs.

Over the last century, some Jewish worlds have been irretrievably lost while other Jewish worlds have been born anew. Roman Vishniac was a participant in, observer and photographic chronicler of many of these events. His work forms the context for this event and Monday’s symposium topics focusing on the Jewish lives Vishniac captured in interwar Eastern Europe, Weimar Germany, and in the immediate aftermath of the Six Day War in Israel. The photographic images Roman Vishniac took in all three places provide a counterpoint to debates about identity and belonging that once dominated public life and the reverberations of these debates that continue to ring out in our own day.

Moderator: Barbara Kirshenblatt-Gimblett University Professor Emerita and Professor Emerita of Performance Studies at New York University, Chief Curator of the Core Exhibition at POLIN Museum of the History of Polish Jews, and a Magnes Scholarly Advisor

Generously funded by the Center for Jewish Studies Annual Diller Lecture and Taube Philanthropies, this event is free and the public is invited to join virtually, adhering to campus COVID-19 guidance.

For more information about this event, including how to register, please visit the event website.