The Social Role of the Deli in American Jewish Life 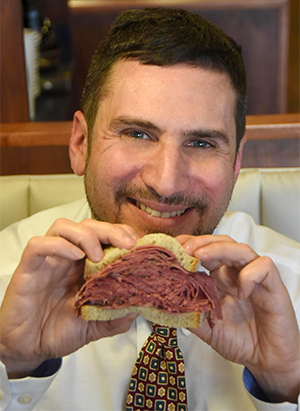 Noted historian, author, and collector Ted Merwin presents an interactive, multimedia lecture on the ever-shifting place of the Jewish delicatessen in American life. In New York, San Francisco, and cities in between, the deli was the lifeblood and linchpin of the Jewish community. The “soul food” and convivial atmosphere it dished up became a quintessential part of American culture for Jews and non-Jews alike. Moreover, the deli served as a crucial gathering place–even a kind of “secular synagogue”–for Jews who were rapidly becoming more acculturated into American society. But as Jews moved into the suburban middle class after the Second World War, the deli gradually lost its bite, no longer appealing to the children of deli owners as a viable career and giving way to other ethnic restaurants and cuisines, as well as falling victim to the American craze for health and fitness.

Dr. Merwin will argue that the deli, which originated in Germany and Eastern Europe, developed in this country into an emblem of Jewish culture that, while greatly diminished in number, continues to mutate and serve a new generation that is more interested in sustainability, gastronomic hybridity, and artisanal food and drink than in traditional Ashkenazic Jewish cuisine. He will conclude by showing and analyzing clips from deli-themed songs, commercials, television shows and films about the Jewish experience—think When Harry Met Sally, Curb Your Enthusiasm, and The Marvelous Mrs. Maisel, just for starters—to demonstrate the deli’s continuing hold on the American popular imagination, particularly in the context of interfaith relationships and friendships.

Ted Merwin holds a Ph.D. in Theatre from the City University of New York (CUNY) Graduate Center. He taught religion and Judaic studies for more than 15 years at Dickinson College (Carlisle, Pa), where he was the founding director of the Milton B. Asbell Center for Jewish Life. He moonlighted for almost two decades as a culture critic at the New York Jewish Week, where he wrote on the performing arts, film, food, and other aspects of Jewish culture. His articles have also appeared in the New York Times, Washington Post, Newsweek, Haaretz, and many other newspapers and magazines across the English-speaking world. He currently serves as Senior Writer for the Jewish Federations of North America (JFNA), based in New York and Washington, D.C.

In addition to publishing numerous academic articles on American Jewish history and culture, Dr. Merwin is the author of two books, In Their Own Image: New York Jews in Jazz Age Popular Culture and Pastrami on Rye: An Overstuffed History of the Jewish Deli, which won a National Jewish Book Award. He is the scholarly advisor to the New-York Historical Society on its current exhibit, “I’ll Have What She’s Having: The Jewish Deli” which originated last Spring at the Skirball Cultural Center in L.A. He lives in Baltimore, Maryland with his wife and three daughters. He has an extensive private collection of deli memorabilia upon which he draws for his research and public lectures.