Beyond the Temple: Jewish Material Identity from the Hasmoneans to Herod 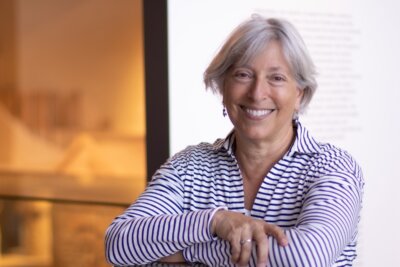 When did Jews first begin using material goods to communicate a religious identity? Why did such a practice arise, and what were its social and political consequences? In this lecture, Andrea Berlin couples archaeological remains with historical testimony to address these questions. The story begins in the second century BCE, with the rise of the Hasmoneans, a landed family from rural Judea who leveraged military success and political connections to establish themselves as both religious and civic leaders. The Jewish-Mediterranean state they created lasted just two generations – but by the time of its demise in the mid-first century BCE it had provided the context and impetus for the full integration of Judea into Mediterranean political culture. This gave rise to an elite class beholden more to political than priestly interests – and set up a clash between two modes of Jewish self-understanding: one who took its cues from that extreme philo-romaios Herod; and a second who saw themselves as fulfilling a heroic Maccabean vision of a re-conquered Promised Land. In the nexus between these modes, archaeological remains reveal that there developed in Judea and Galilee a materially-inflected lifestyle in which people adopted specific goods and behaviors to emphasize a connection to Jerusalem. This was a commoner’s lifestyle; it allowed non-elites to infuse their homes and day-to-day lives with a Jewish sensibility. Over the course of the early to mid-first century CE, this lifestyle became implicated in the development of hardened social identities, which in turn contributed to zealotry and, ultimately, the Great Revolt against Rome.

Andrea M. Berlin is the James R. Wiseman Chair in Classical Archaeology at Boston University. She has been excavating in the eastern Mediterranean for over forty years, working on projects from Troy in Turkey to Coptos in southern Egypt to Paestum, in Italy. Her specialty is the Near East from the time of Alexander the Great through the Roman era, and especially the intersection of political and cultural change in antiquity. Recent books include The Middle Maccabees: Archaeology, History, and the Rise of the Hasmonean State, and Spear-Won Land: Sardis, from the King’s Peace to the Peace of Apamea, both co-edited with Paul J. Kosmin. Her current project is a book and video series on the materiality of Jewish life in the Second Temple period.