At Home in America? Three Poets on Belonging & Diaspora in an Unsettled Moment 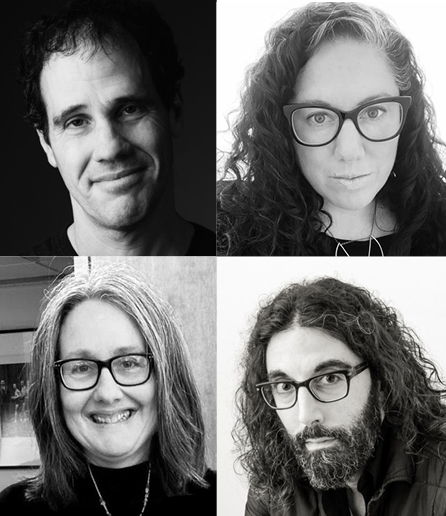 The Center for Jewish Studies, in conjunction with The Magnes Collection of Jewish Art and Life, is pleased to present this in-person poetry panel featuring Dan Alter with Erika Meitner and Daniel Khalastchi, two of the most exciting Jewish poets working in the US, with new books out now or in the spring. Naomi Seidman will moderate a discussion and reading, offering poetry as a lens into how particular sensibilities navigate these issues in a time of uncertainty and possibility.

Dan Alter‘s work moves between worlds: from the dust and tumult of construction sites where he makes his living as an electrician, to the oceans and skies of more than one continent. His poems and reviews have been published widely. He has been a fellow of the Arad Arts Project and a finalist for the Rosenberg Award for Poems on the Jewish Experience. He is a member of the Community of Writers at Olympic Valley. His first collection of poems, My Little Book of Exiles, was published March 1, 2022 by Eyewear Publishers of London.

Daniel Khalastchi is an Iraqi Jewish American. A graduate of the Iowa Writers’ Workshop and a former fellow at the Fine Arts Work Center in Provincetown, he is the author of three books of poetry—Manoleria (Tupelo Press), Tradition (McSweeney’s), and American Parables (University of Wisconsin Press, winner of the Brittingham Prize in Poetry). His work has appeared in numerous publications, including The Believer Logger, Colorado Review, Denver Quarterly, The Iowa Review, Poetry Northwest, and Best American Experimental Writing. Daniel has taught advanced writing, literature, and publishing courses at Augustana College, Marquette University, and the University of Iowa, most recently as a Visiting Assistant Professor at the Iowa Writers’ Workshop. He currently lives in Iowa City where he directs the University of Iowa’s Magid Center for Undergraduate Writing. He is the cofounder and managing editor of Rescue Press.

Erika Meitner, daughter of an Israeli father and German-born mother whose family survived the concentration camps, is the author of five books of poems, including Ideal Cities (Harper Perennial, 2010)—a 2009 National Poetry Series winner; Copia (BOA Editions, 2014); and Holy Moly Carry Me (BOA Editions, 2018), winner of the 2018 National Jewish Book Award and a finalist for the National Book Critics Circle Award in poetry. Her poems have been published most recently in The New Yorker, Orion, Virginia Quarterly Review, The Believer, Poetry, and elsewhere. Meitner is currently a professor of English at Virginia Tech. Her sixth book, Useful Junk, is forthcoming from BOA Editions in 2022.

Naomi Seidman was the Koret Professor of Jewish Culture at the Graduate Theological Union in Berkeley, California, and is the Jackman Humanities Professor at the University of Toronto, with a split appointment between the Department for the Study of Religion and the Centre for Diaspora and Transnational Studies. Her first book, A Marriage Made in Heaven: The Sexual Politics of Hebrew and Yiddish, appeared in 1997; her second, Faithful Renderings: Jewish-Christian Difference and the Politics of Translation, in 2006. A third, The Marriage Plot, Or, How Jews Fell in Love with Love, and with Literature, appeared in 2016. A 2016 Guggenheim Fellow, Professor Seidman is presently working on a study of the founding of Bais Yaakov in interwar Poland.